UPDATE: Boo and Pistol are flying their way back to freedom.

Johnny Depp’s terriers were put on death watch after it was discovered that the two dogs were brought into Australia without first going through quarantine.

Australian authorities considered the two terriers a biosecurity risk after it was publicly learned the dogs had been taken to a poodle salon to get cleaned.

Australia’s agriculture minister Barnaby Joyce, who threatened that the terriers would be put down, tweeted on Friday: “Dogs gone.”

It’s being called in the Twittersphere the #WaronTerrier.

Reporters have set up camp in front of Johnny Depp’s rented Gold Coast house in Australia as the time is ticking on the fate of Boo and Pistol.

Depp has to either voluntarily deport his dogs from Australia or (cue dramatic music here) else Pistol and Boo will be euthanized.

That’s right. Australia’s agriculture minister Barnaby Joyce has ordered Depp’s dogs, which the actor allegedly smuggled into the country via his private jet, to “Bugger off” back to the U.S. or be put down.

Joyce’s declaration set a time limit on when Depp has to deport his dogs voluntarily.

“He has decided to bring to our nation two dogs without actually getting proper certification and the proper permits required. Basically, it looks like he snuck them in. We found out he snuck them in because we saw him taking them to a poodle groomer. 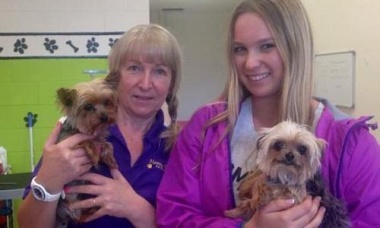 Depp and his partner model/actor Amber Heard are in the Gold Coast so he can resume filming on Pirates of the Caribbean: Dead Men Tell No Tales.

The couple flew into Brisbane on a private jet and were accompanied by their pets.

They were taken to Happy Dogz groomers after hours, according to Heard, so the dogs were never in contact with other dogs.

But that explanation doesn’t satisfy Barnaby who called Depp by his official name and then referred to him as aka Captain Jack Sparrow, the character he plays on the Pirates of the Caribbean franchise.

Watch the 32 second point of this video to witness the full impact of Barnaby’s seriousness when he orders Boo and Pistol to either return to California or face the consequences.