This photo of Keiko the dog getting a ride on a bus makes me smile.

Keiko looks so calm, so keen on the bus ride that I have a feeling that there are many more bus rides in this dog’s future.

The adventure for Keiko began last Tuesday March 31 when the two year old husky leaped over her backyard fence and took off from her Dartmouth home.

Her owner Paige Price posted a note on the Facebook page Nova Scotia Lost Dog Network asking for people to keep an eye out for Keiko.

Keiko ended up making it to busy Main Street where she dodged cars. A passerby waiting for the bus grabbed hold of Keiko and planned to call animal control. 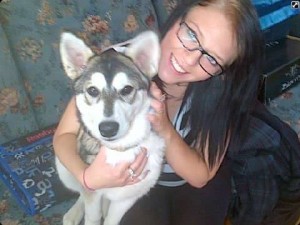 Fortunately, that’s when Halifax Transit No. 10 bus driver Gerry O’Donnell pulled up to the stop, according to the Halifax Chronicle Herald.

“The passenger told me that the dog almost got hit by two cars and of course my heart sank,” said O’Donnell, who owns two dogs. “Huskies are runners and I knew she had probably made it out of her yard.”

O’Donnell decided that rather than wait for animal control and because the passenger had to get to her location, she made the decision to let Keiko on the bus.

The only dogs I’m supposed to have on the bus are service dogs, so I broke the golden rules.”

O’Donnell, a dog lover involved in dog fostering and rescues, had the passenger take the canine to the back of the bus and hold her there.

“Keiko was as good as gold…She just has a beautiful temperament.

At some point, O’Donnell said she glanced in the rear-view mirror and saw the pooch perched on the back seat happily looking out the window.

“I knew she was well taken care of and well loved and I just wanted her to get back home.

O’Donnell was able to reconnect Price with Keiko via the Lost Dogs site after posting the photo of the sitting dog.

Keiko’s photo has since gone viral.

Price said the snow is still so high in her backyard and that’s how Keiko was able to climb up and jump out the 1.8-metre fence.

“She must have leaped quite a distance.

O’Donnell said she’s glad she was able to get the rambling dog back to the owner but Keiko didn’t get a free ride.