A one-year-old cat named Rosie was found stuffed inside a cardboard box at the bottom of a dumpster in B.C.’s interior just hours after her owner reported her missing.

Rosie was alive but had been tortured. Her legs were forced behind her neck and restrained with zip ties.

The BC SPCA said Rosie was retrieved in southeast Pouce Coupe Monday night. 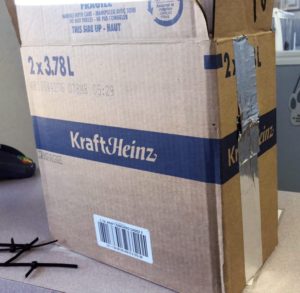 A man was collecting bottles from the dumpster, located outside the Hillcrest Motel, at 11:30 p.m. on Monday, when he heard a soft meowing coming from underneath the piles of garbage,” said Wendy Davies, manager at the South Peace SPCA branch.

The man freed the cat and cared for her overnight before taking her to the SPCA the next day.

“We immediately took the cat to the vet and thankfully she has no lasting injuries or medical concerns,” Davies said.

“If that gentleman hadn’t found her when he did, though, there’s no doubt she would have suffocated. It is heartbreaking to think how much she was suffering and how terrified she must have been.”

The SPCA said the owner was located using the information stored on a microchip on the cat.