A kitten that was rescued by the RCMP as it was being doused in alcohol and lit on fire at the Craven Country Jamboree is expected to make a full recovery, veterinarians said.

Mounties were called to reports of animal abuse at a campsite at the festival in Craven, Saskatchewan on Saturday night. Officers scooped up the cat and whisked it to TM’z Veterinary Clinic in Lumsden.

“Very saddened from some events at the CRAVEN COUNTRY JAMBOREE,” the clinic posted on Facebook. “We had the RCMP rush us a little kitten with burns on her body. The kitten had been brought onto the grounds and Drunken individuals were drenching it in alcohol and then lighting it on fire. Animal cruelty to appease their drunk state SHOULD NEVER BE TOLERATED. Our team at TMz are shaken by these events.”

Then, Dr. Tanya Marshall offered this update at 12:45 a.m. Sunday, including a new name for the kitten.

“She is doing very well and was so comfy on her pain medications that she was chowing down on a meal late tonight. She is being treated with compassion and care at TMz. We have named her “Jamboree” and her prognosis is excellent. Thought everyone should know her status this early morning!” 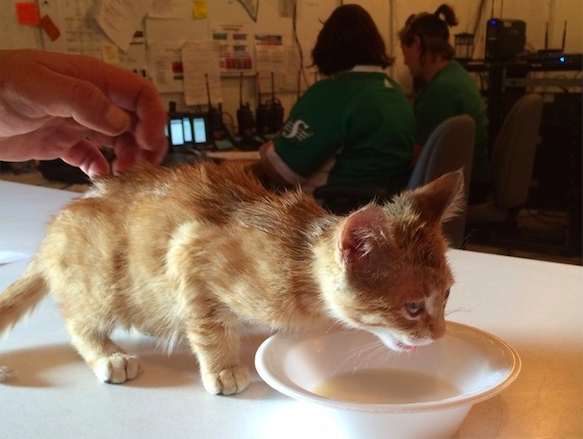 In a statement, festival organizers said they were “saddened and disgusted” about the incident and had “high praise” for the RCMP for moving in quickly.

“RCMP members and Jamboree staff ejected one male that is currently being investigated under the Criminal Code and the Animal Protection Act,” officials said.

“While we are shocked that one of our patrons would participate in such a disgusting act, we are positive this is a singular incident and we are confident that we have handled the situation in the best possible way,” Kim Blevins, the festival’s director of marketing said, “We love animals, and we know most of our patrons love animals. The evidence is walking down the festival’s streets this afternoon as people walk their pets throughout the festival’s campgrounds on this beautiful day.”

A festival staff member has already offered to adopt Jamboree. The vet clinic said the cat’s wounds have to be given time to heal before she can go to her forever home.

Blevins said in addition to the RCMP investigation, the festival could order a lifetime ban for anyone involved.