Scouts will be on the prowl this fall for the world’s fiercest, well maybe, fluffiest feline competitors.

Building on the success of the inaugural Kitten Bowl earlier this year, Hallmark Channel is gearing up to Kitten Bowl II, which will air, naturally, on “Su-purr Bowl Sunday” in 2015.  But this time around, rookie kittens will “claw their way to the end zone” during regular season games as part of the Feline Football League (FFL) build up to the big game. 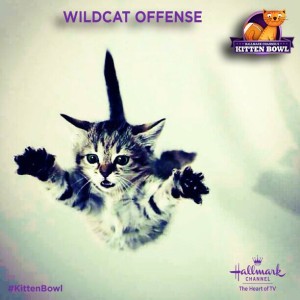 Beginning in November, the FFL will be on the lookout for adorable and adoptable cats to take part on the kitten draft. The cats will be put through their paces on obstacle courses filled with lures such as yarn balls, toys on string and lasers. (Yes, lasers!)

Bill Abbott, president and chief executive officer of Crown Media Family Networks, said in a statement the league will help highlight the needs of animal shelters and on the “incredibly beautiful and talented pets available for adoption.” Hallmark is partnering with the North Shore Animal League America, which will provide the feline competitors with forever loving homes once the games conclude.

The brains behind Kitten Bowl II include folks who brought The Biggest Loser, Extreme Weight Loss and of course, My Cat From Hell, to television. Watch out National Football League. You have some pretty cool cat athletes on your tail.