Lightning can be deadly for critters.

Near Santiago, Chile, dozens of cows were struck and killed by lightning.

Ranchers say the storms last Sunday which struck south-central Chile caused massive destruction to their herds. One ranch, in Los Rios, saw 54 of their cows killed by lightning. Another one was blinded.

Another rancher reported nine of his cows sheltering under a tree were struck and killed.

We did a little more digging and learned that lightning actually kills a lot of animals. In this post in Science Blogs, it listed how certain animals are particularly prone to being struck by lightning. 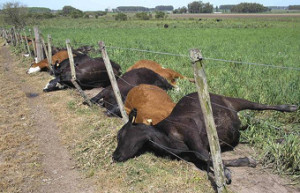 Elephants have been struck and killed as have wild deer, rhinos and sheep.

Giraffes are at significant danger of being struck by lightning because they’re in environments that have few tall trees and are topographically or geologically predisposed to attract lightning.