An investigation is now underway after a video of a lion, seemingly drugged in order to pose for photos with tourists, surfaced at a zoo in Indonesia.

The Scorpion Wildlife Trade Monitoring Group posted the almost minute-long video of a zookeeper at Taman Safari Indonesia propping up a dozy lion in order for visitors to have their pictures taken at the Bogor facility.

The World Association of Zoos and Aquariums is now investigating.

“We are seriously concerned and disturbed by the footage. WAZA in no way condones the sedation of animals for photo-shoots or for animal human interactions of any sort. This is entirely opposed to our Code of Ethics and we are examining all aspects of this story and hope to receive more information very soon,” Dr. Gerald Dick, the association’s executive director, said in a statement.

The video, posted by the wildlife monitoring group just a  few days ago, has been viewed more than 5 million times. It is disturbing.

“Scorpion’s photos show clearly, two keepers forcing the lion to stay awake,” the group said in a press release. “Everything about this is unnatural and cause for concern.”

“Lion cubs sleep for more than 12 hours [a day]. The lion in the video wasn’t drugged, he was sleeping,” Yulius Suprihardo, a safari spokesperson, told BeritaSatu.

It also responded on its Facebook page, which has come under social media attack: “Dear All. Thank you for msg. Please do not accuse without proof, please do not be affected by the issues spreader that are not true , and please think conscientiously and wisely. thanks.”

Marison Guciano, senior investigator with Scorpion, said in a statement the safari must ensure the animal’s welfare comes first, not as an opportunity to make money.

“Scorpion calls on Taman Safari to stop this and other exploitation of wild animals. Zoos are not supposed to entertain visitors. They should be about conservation and education, I’m sure we all agree – don’t we?” Guciano added. 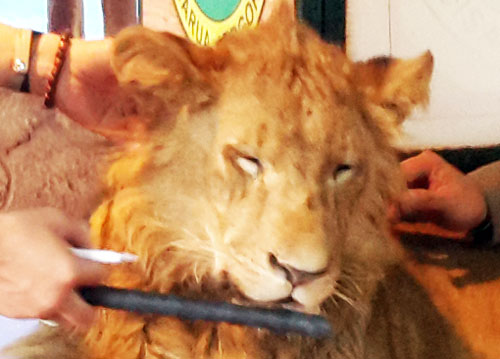