UPDATE:  The American tourist who was killed by a lion at a South African wildlife reserve was identified as Vancouver-based Game of Thrones special effects editor Katherine Chappell, 29.

The lion attacked Chappell through an open car window, which a park spokesman insisted was “strictly against policy”.

She worked as a visual effects editor and information co-ordinator on the season four finale of HBO’s Game of Thrones episode ‘The Children’. Her IMDB profile also lists previous roles on Captain America: The Winter Soldier, Godzilla and Divergent.

The eulogy, written by her sister Jennifer on Facebook, read: “We are broken-hearted to share this news with our friends and family. Yesterday morning, while on a volunteer mission to protect wildlife in South Africa, Kate Chappell was involved in a tragic and fatal accident.

The lion apparently reached into the open window of a tour car in a park near Johannesburg and mauled an American tourist.

The tourist, who was in the passenger seat of the car, was killed while paramedics were treating her. The tour operator, who was driving the car, sustained injuries on his arm from fighting off the lion, according to a spokesman for The Lion Park.

Witnesses quoted in South African news media reported they saw two people travelling in a car with their windows open. The lion is reported to have jumped at the woman through the open window and killed her.

The Lion Park calls itself Gauteng’s No. 1 tourist destination and guarantees “super close up views.”

A one hour tour costs about $52 Cdn per person. It’s website says the tours are safe. 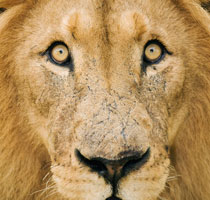 Nowhere can you get closer to a pride of Lions and other animals and still be completely safe. See the animals up close in all the activities that the Lion Park offers, whether you go on a self-drive tour, guided tour or in the new electric silent vehicle – we guarantee that you will get super close to the animals, not to mention special tours like the amazing cheetah walk and the exclusive mesmerising lion tour guided by world renowned animal behaviourist, Alex Larenty. Amazing photo opportunities await around every corner in the park, share your memories with friends and family by having your photos taken professionally by our photographers.

In a statement to ABC News, the U.S. embassy official in South Africa said the embassy has received reports of an incident involving a U.S. citizen but did not immediately have additional details.

The lion responsible for the attack will not be euthanized, but could be moved to a private location, Simpson told ABC News.

Earlier this year, a lion attacked an Australian tourist in his car, though he did not die from his injuries, Simpson added.