Little Ryder tried to get some kittens in line and it became a major situation.

The little boy the star of a video that has seen nearly half a million views on YouTube has a word in his vocabulary that he must have just learned because he uses it over and over again to describe the difficulties he’s having getting cats to stay where he wants them to stay. 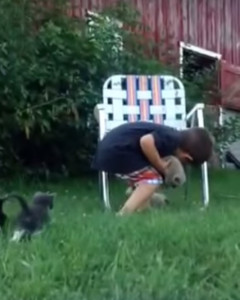 “There’s a situation…I’ve got two of them. Now I’ve got more of a situation. Can’t carry them all.

Just when Ryder gets hold of one kitty and gets the feline to stay on a blanket, two others wander off causing Ryder, who never loses his temper to declare:

His unhelpful parents can be heard behind the camera telling Ryder where the missing have gone leaving the little boy to wonder, as he moves a kitty back to where it was just a few seconds ago before it took off again:

How are we going to get all of these situations? 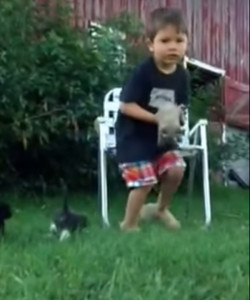 Don’t know, Ryder, but we like to think you’re still out there getting all those kitties back where they should be and handling the situation.