April has her baby! See it all here.

UPDATE: April 9
“Our big girl seems to be moving around quite a bit! That is a good thing! Moms will get very “Pacey” before and during birth….we will see if it is any indication as to what is to come. All else is well.
April enjoyed yard time today! We have opened her door for weeks and she has only stood in the doorway; but today! – of all days! – she ventured out! Tonight’s photo is of that time outside and tomorrow we will send more exclusive content to our text subscribers – of today and tomorrows escapades!
If you haven’t subscribed yet we encourage it! it is a Labor alert and Baby Update opportunity! www.aprilthegiraffealert.com
The week promises warmer temperatures and a full moon is upon us! I hope that will shake things up!”

It’s taking weeks but on Sunday, April the giraffe’s calf is finally making its presence known.

The calf was visibly poking April’s belly on  March 19, making a bulge in her side, her keepers at an upstate New York zoo say.

Holy smokes’ baby is sticking out,” the zoo posted on its Facebook page.

Despite the progress, April still isn’t in labor, the zoo said.

It is very evident in visual observations that the calf is moving up and sticking out! All are happy with progress, we are not in labor at this time.

Temperatures are warming and snow is melting. We hope to have the giraffes outside soon! Excitingly – a new batch of enrichment items should be arriving tomorrow and will be installed for viewer enjoyment!

Hope all had a great weekend and we look forward to another week and hopefully the arrival of our long awaited calf.

April’s appetite “remains strong”, but her hungry calf has calmed down, her keepers said.

The mom-to-be is now carrying everything closer to her rear, which keepers say is exactly what they want. April’s calf has calmed down, a stark change from the active kicking and moving keepers have observed over the past couple of days.

Keepers have noted a calming down of the calf and April carrying everything a bit towards the rear. This is exactly what we want! Wax caps are still in place. Appetite remains strong.

The photo below was shot last summer as April and Oliver tongue fight over a guests carrot offering! 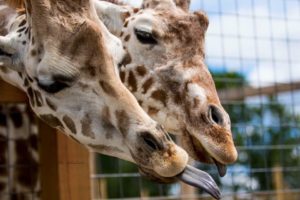