Visitors to the Smithsonian’s National Zoo in Washington, D.C. will have to wait a bit longer to see its three newest residents, but animals lovers around the world can watch the pachyderms settle in to their new digs via a live elephant cam. 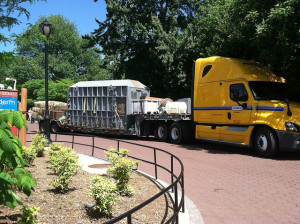 The trio travelled by two trucks and stopped every few hours for water, food and status breaks. Along with them were veterinarians, keepers and animal care experts from both zoos. Video cameras also monitored their welfare along the incredible journey.

“It was quite a journey, but we planned and prepared for nine months, which served us well,” Tony Barthel, curator of Elephant Trails at the National Zoo, said in a statement. “The whole transport team worked together seamlessly to make the elephants as comfortable as possible and get them to Washington safely. It’s going to be very exciting to see the two herds get to know each other and form a new herd here.”

The Calgary Zoo said in 2012 that it wanted the move its elephants to more suitable – and warmer – accommodations and spent three months training the elephants with their 10,000-pound travel crates to “ensure a safe journey.” The elephants will be kept in quarantine for at least 30 days before they are introduced to the zoo’s other four elephants. Philanthropist David M. Rubenstein contributed $2-million to help bring the elephants to Washington.