A male gorilla who escaped from his den at Zoological Society London Zoo created a lockdown of the area before staff tranquilized the escapee and returned the 18-year-old male to his den.

The zoo said the exhibit is secure and the situation was resolved quickly and efficiently. Visitors to the zoo were moved to a lock down building after the gorilla went missing. 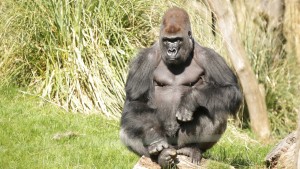 On Facebook, one of the visitors Kirstina Bond wrote she’s grateful to staff for how the situation was handled.

“Visitors were made safe. I myself was told to go into the enclosure opposite Gorilla Kingdom as it’s a full enclosed area. Staff then came a while later to guide us all out safely,” she wrote. “I am so very relived that Kumbuka, who is a dear boy and such a sweetie, was re-captured safe and is ok. I take my hat off to all the staff at London Zoo today for their handling of this situation.

Another Facebook post by Dan Cruickshanks made a joke that the escaping goirlla was one of many male silverbacks to stage a walk out in protest of justice for Haramble.

Harambe was a silverback gorilla who was killed last summer by zoo officials who shot the male after a boy fell into the primate’s enclosure at Cincinatti Zoo. Harambe’s death prompted a public outcry online. 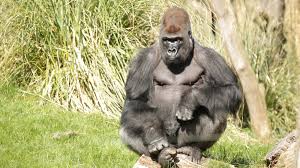 Malcolm Fitzpatrick, senior curator of mammals for the zoo, said on BBC’s Radio 4 Today that

Our male silverback gorilla Kumbuka did not break through any glass”.

But he repeatedly rebuffed questions over how the animal got into his keepers’ area, telling BBC’s Radio 4 Today programme that the incident was being investigated.

It’s a full investigation that we are carrying out at present,” he said. “The incident was dealt with very professionally at the time. The gorilla did not leave the secure keeper area.”

The gorilla escaped around 5:15 pm Thursday and staff found him about an hour later.

Fitzpatrick denied reports that the western lowland gorilla was aggressive and frustrated, after Buzzfeed quoted one zoo source who said Kumbuka had smashed the glass of his enclosure “a number of times”, and described the animal as a “fucking psycho”.

He’s a lovely animal. He’s a gentle giant, and our visitors know how well he interacts with his children, his two-year-old daughter and one-year-old son,” he said. “Male gorillas are impressive animals. They do a form of display behaviour where they will bang tree trunks, they will bang a window to show how impressive they are and show off to the females in the troop.”

He denied it was cruel to keep large primates in enclosures, and pointed to the zoo’s conservation work to reintroduce the Partula snail, which was extinct in the wild, to French Polynesia following a breeding programme at London zoo.

The Born Free Foundation said the incident was a “startling reminder” of the risks of keeping dangerous wild animals in captivity. On its website, the foundation says that there have been other reports of near escapes.

While we are relieved that this incident apparently ended without  injury to visitors or to Kumbuka, it is yet another startling reminder of the risks associated with maintaining dangerous wild animals in captivity. This incident could have ended very differently.”

When the escape occurred, the Born Free Foundation was already in the process of investigating unconfirmed reports from a BBC journalist of damage to the perimeter glass at the gorilla enclosure and of a previous near-escape involving the gorillas.

The foundation, which campaigns for zoos to be phased out, called on the government to increase penalties for attractions if they are found to have put visitors or animals at risk.

According to the zoo’s website, Kumbuka is one of at least seven gorillas living in its Gorilla Kingdom.