The Creston RCMP are asking residents in the area of Crawford Bay and Kootenay Bay, to be aware of the presence of an adult cheetah that was spotted along Hwy 3a yesterday afternoon.

A witness called police around 4:30 pm saying a cheetah was spotted wandering roadside by a motorist on Hwy 3A near Kootenay Bay.

The witness was able to photograph the animal and reported the incident to the Creston RCMP. It was observed to be wearing an orange cloth collar.

Until the animal is located people are asked to be vigilant while outdoors, especially with their small children and animals, said Cpl Dan Moskaluk with Southeast district RCMP in British Columbia.

BC Conservation Services advises that a cheetah is typically shy and less aggressive then other members of the Felidae Pantherineae (large cat) family. Regardless of it having a collar on, it should be considered and respected as a wild animal. 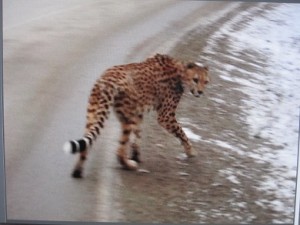 Public safety along with the animal’s welfare are paramount at this time.

If anyone should observe the animal, authorities ask that it not be approached and to immediately call 911 or the Controlled Alien Species Unit of the British Columbia Conservation Service at (877)952-7277 to report the sighting.

#CrestonRCMP Does anyone know someone who owns a cheetah, big cat spotted near Crawford Bay https://t.co/LnyYe4ubhy