The Serengeti plains in Tanzania is home to lions, leopards, elephants, wildebeest, zebra and buffalo.

It’s also where the ancient people of Maasi live. Forty thousand of them live off their ancestral land and there are now concerns the Tanzania government plans to remove them in order to make way for a luxury big game hunting reserve.

A section of the plains is to be sold to a Dubai-based company, the Ortelo Business Corporation for a commercial hunting ground. The reserve will be used as a big game hunting grounds for the Dubai royal family.

Last year, following major local and international opposition to the deal, Tanzania’s president promised the Maasai they could stay on the land.

Now in what’s been called a sudden u-turn, the government has told the Maasi that the deal is back on and they’ve been ordered to leave their land by the end of the year.

The Maasi, nomadic herders, has been fighting the commercialization of their traditional lands for decades have long worried about the increasing encroachment of hunting and tourism permits on the Serengeti.

This is the worst kind of betrayal,” he said. “They said our lands were safe — the lands where the Maasai have lived and died for generations — but now they are going to take them from us, and sell them to rich royals from overseas who want to come and slaughter animals. We will never accept this deal. Our land is not for sale.”

A petition has been set up urging the Tanzanian government not to sell the land to become a hunting ground. The petition wants to reach 250,000 signatures. It’s reached over 184,000 signatures already.

Last week, the Tanzanian president Jakaya Kikwete tweeted out that the Maasi can stay. 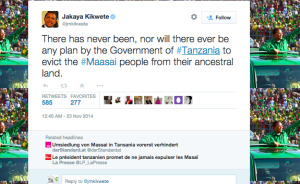 The Maasi community leaders had apparently rejected an offer of  1bn Tanzanian shillings (about $560,000 C) as the price for leaving about 1,500 square kilometres of their land. The worry is that if the government changed its mind once, it could change its mind again. There are no guarantees that the government’s assurance that the Maasi can stay on their land can’t be reversed.

More than 2 million animals migrate north from Serengetigeti, the largest terrestrial mammal migration in the world across the East Africa plains. In search of ripe grass, hundred of thousands of wildebeest, zebra and gazelle migrate in a clockwise fashion from the Serengeti plains over to Kenya’s Masai Mara.