This is so terribly sad.

A reward of $6,000 has been set up after some animal abusing jerk tossed a sandbag with two dogs tied up inside out of a moving vehicle.

The mama dog chewed her way out of the sandbag but it was too late to save the puppy.

By the time the Santa Cruz County Animal Shelter arrived, the six-year-old Miniature Pinscher was seen next to the body of a four-to-six week old puppy.

WARNING: This photo may be disturbing to some. 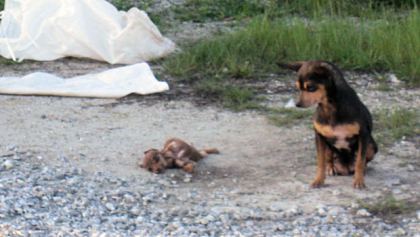 When animal control officers placed the mother dog in the car, she began to cry and claw at the door. But when the body of the puppy was put in the crate with her, she calmed down, according to Stosuy.

Investigators believe the mama managed to chew out of the sandbag after being tossed to the side of the road.

A necropsy showed the puppy died of head trauma.

According to the report,“in an attempt to revive the puppy, the mother accidentally bit the puppy’s tongue off.”

In a statement, Stosuy said the person throwing out the dogs in a sandbag treated the critters like they were garbage.

What makes this case so disturbing is that a person would decide that putting dogs in sand bags and throwing them out of a window like garbage was even an option…There are always alternative options if you have an animal you can no longer keep, including surrendering them at no cost to Santa Cruz County Animal Shelter.”

The mama dog is recovering.