Ok, get ready to dab at your eyes with this story.

They see a lot of adorable things at the Barker’s Pet Motel near Edmonton, Alberta in Canada but this story even made the staff gush.

Last night our newest foster puppies arrived from Alberta Animal Rescue Crew Society – AARCS. Also staying with us right now is a dog who was recently adopted from the Humane Society who had her own puppies taken away about 2 weeks ago.

Somehow she let herself out of her kennel to lay next to their room.

❤ We put them together for a while and all 3 of them were so happy!!!

Maggie, a six-year-old rescue from the Humane Society, had her litter of seven puppies recently put up for adoption. While her family was away on vacation, Maggie wanted until the lights went off and somehow, she got out of her kennel and went seeking the crying puppies.

She managed to slide her water bowl out and slide her way through,” explained Sandi Aldered, the owner of Barker’s Pet Motel to Global News.

The space vacated by the water bowl isn’t large, but neither is Maggie.

From there, it was straight to the puppy cage, where rescues Hannah and Kari were whining.

I think she knew as soon as those puppies got here at 4 o’clock Friday afternoon, that they were here and after we left she thought, ‘here’s my chance! I’m going to go and see them,’” Aldered said. 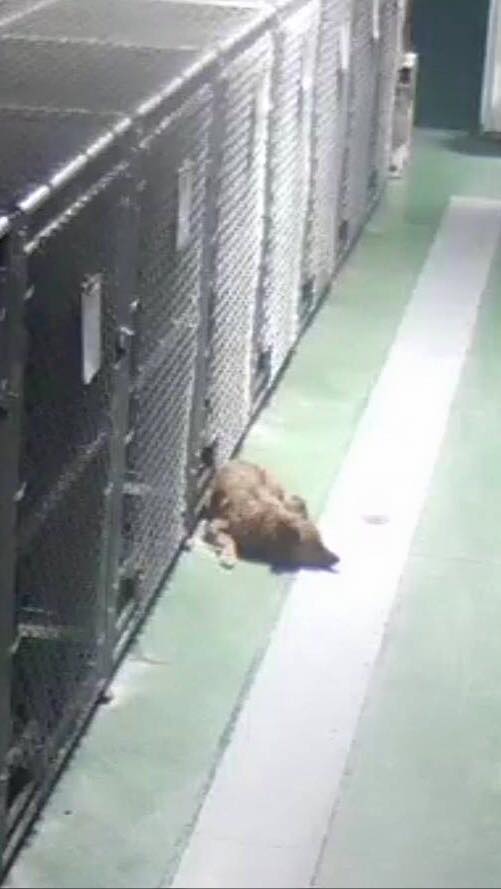 Maggie has been spayed since she had her puppies, but her family and the staff at Barker’s Pet Motel believe the maternal instinct still kicked in when she heard the babies crying and was waiting for the opportunity after the lights went out, to push out her water bowl and wiggle out of her cage.