Sister and brother duo Aubry and Kale Walch have spent the last several years perfecting The Herbivorous Butcher’s, which is believed to be the world’s first vegan butcher shop.

Aubry has been a vegan for 18 years and has spent over a decade creating meat-free alternatives to many the foods that she grew up with on Guam. The country is known for it’s passion in making cooking s a deep-rooted part of everyday life and each meal consisted of at least two different kinds of meat or seafood, not to mention a wide variety of flavors, spices, and textures, blending Guamanian cuisine with culinary cultures from across the world. 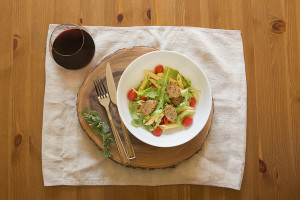 After years of watching Aubry thrive as a strict vegan, Kale (yes, that really is his name!) Walch followed suit and became vegan.

When the two of them decided that it was time to butcher shop, they went on Kickstarter and raised $60,000. Private investors have also paid in to help open the shop.

The Walch’s dream of a brick and mortar store started at Minneapolis Farmer’s market more than 5 years ago.

“I feel the world is making a shift in the empathy of the populace and people are eating with their morals even more than their taste buds,” said Kale. “I think people are thinking a little bit harder about what they are putting in their mouths and so what we’re trying to do is come up with a product to help them switch over easily,” Aubry added.

So they’ve created things like Korean BBQ ribs, brats and a host of other meat appearing products. 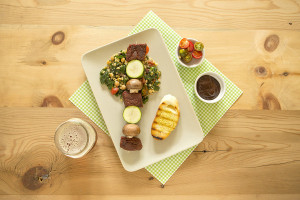 The siblings started The Herbivorous Butcher to bring small-batch, locally-sourced, all-natural meat alternatives that are always fresh, flavorful, and protein-rich so consumers never feel like they’re sacrificing anything for healthy and ethical eating.

Products packed with protein and B-vitamins

All the products provide optimum amounts of protein and B-vitamins that many meat alternatives lack, as well as modest levels of monounsaturated fats that help reduce cholesterol and satisfy your hunger so you can really feel good while feeling good about eating well.

“Making our products is like making a thick muscular dough,” Kale explained as he worked on making a batch of dairy free butter. It’s not surprising that has also presented some big challenges. “Texture is tough and that is the first and most important thing with every new product.”

All of what these “butchers” are doing has attracted worldwide interest with franchise requests from Lebanon to Mexico.