The video has sparked in Australia protests and rallies, with thousands of people urging the government to stop live sheep exports. The Australian Labor Party says if it gets elected it will ban the practice.

Agriculture Minister Joel Fitzgibbon said as there’s no way to stop deaths of sheep during export that there is no “future” for Australia in live sheep exports.

A crew member who worked on the cargo ship Awassi Express used an iPhone to film videos over over five separate voyages between Australia and the Middle East.

In one incident, on a voyage last August carrying 63,805 sheep, thousands of sheep died. The passage was a 21-day journey from Fremantle to Qatar, Kuwait and then on to the United Arab Emirates. On one single day, 880 sheep dropped dead from heat stroke. In total 2,400 sheep died on the journey which triggered an automatic government review.

The government rules dictates that when 2 per cent of livestock die during transport, there must be a review; on that voyage the rate was almost double that amount at 3.79 per cent.

The Department of Agriculture cleared the voyage of any breaches; that investigation was reopened after 60 Minutes aired the initial footage, which also showed that despite it being forbidden to allow pregnant ewes on board, lambs were born during the voyage. They had their throats cut and their bodies were tossed overboard. 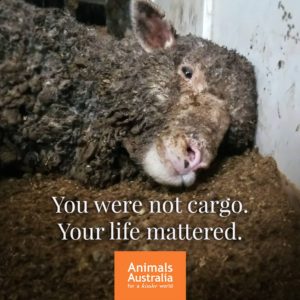 In a letter to producers, Emanuel Exports managing director Graham Daws said the company was “proud of our industry”, insisting it was “accountable, transparent and ethically sustainable.”

He said the company had “had nothing but support from the livestock industry and members of the community” since the “release of extremely distressing footage.”

“Whilst acknowledging the distress the incident has caused, it is a sad indictment that commentators have given no credit to the officers and crew of the vessel, including the Australian veterinarian and stockmen, who all worked under very difficult circumstances and prevented further losses,” he said.

The whistleblower took the footage to Animals Australia. Lynn White of Animals Australia provided the video to the Department of Agriculture and the International Transport Workers’ Federation. 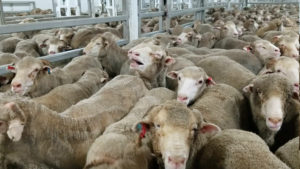 “We were concerned that the workers on the animal decks are effectively enduring the same dreadful conditions during the Middle East summer that the animals are,” she said.

These poorly paid Filipino workers were left to deal with the thousands of melted, decomposing sheep carcasses. They are effectively ‘cleaning up’ after an Australian industry, yet are not protected by the worker safety provisions.”

Paddy Crumlin, of the Maritime Union of Australia and International Transport Workers’ Federation, said the video showed the “living hell” that was the life of a poorly paid crew member on board having to deal with the “barbaric practices” of the live export trade.

This new footage is a terrifying reminder of what life can be like at sea when workers have no rights. It’s a living hell,” he said.

The horrific footage has sparked surging political momentum for an outright ban on the live export trade not just in Australia, the world’s largest exporter of sheep and cattle, but in other countries as well. Already New Zealand has ended live live exports for slaughter more than a decade ago.

In Britain, Theresa May’s Conservative government announced it was also considering a ban.

This week, the Labor Party said it was now convinced that the trade could not be fixed and would be phased out if it wins the next election, due next year.

The current prime minister Malcolm Turnbull is also facing pressure from his own government to match the plan to ban live exports for slaughter with backbenchers urging the government to do the same.

Animals Australia and RSPCA Australia has committed $1 million towards a structural adjustment package for sheep producers if the Turnbull government pursues a phase out of the live sheep trade.