Advocates of going meatless for environmental reasons are at the COP21 in Paris this week to warn that if global trends in meat consumption continues, global warming will more than likely exceed 2 degrees, even with dramatic emission reductions across non-agricultural sectors.

Roni Neff, PhD, an assistant professor who teaches public health and food system sustainability at Johns Hopkin said the connection of meat consumption to climate change is not garnering the serious attention it deserves.

“Much of the talk at COP21 will be focused on government policies in energy and transportation, but we can’t get from here to there without also changing diets. That’s a win-win for climate and for public health.”

Representatives from 15 Meatless Monday countries including the US, Israel, Korea, Denmark, Nigeria and Kuwait, will join leading scientists, politicians and chefs at COP21 to underline the link between meat and climate change and the impact that simple changes in our diet, like going meatless one day a week, can make in slowing global warming.

Researchers will present a review of peer-reviewed research that suggests GHG emissions in 2050 from agriculture alone will total over 20 gigatons (Gt) if current meat consumption grows with GDP as the FAO predicts.

This accounts for almost the entire emissions budget of 21 Gt, leaving little room for emissions from other sectors.

As an illustration of the impact of simple dietary changes like going meatless on Monday, studies suggest that the annual savings in GHG emissions in 2050 if everyone went meatless one day a week could be 1.3 Gt, the equivalent of taking over 273 million passenger vehicles off the road or closing 341 coal-fired power plants.

Meatless Monday was started in 2003 by former ad exec Sid Lerner to promote the health and environmental benefits of cutting out meat one day a week, but has since grown to include other global benefits like reducing climate change. 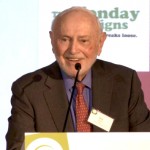 The global movement picked up steam in 2009 when Sir Paul McCartney started Meat Free Monday in the UK, and followed by grassroots initiatives in 40 countries. In Brazil, it’s called “Segunda Sem Carne” and in the Philippines, the day is called “Luntiang Lunes.”

The initiative has proven successful in shifting people to a plant-based diet in a variety of settings including schools, cafeterias and restaurants.