A few years ago, supermarkets began heralding the fact that even ugly vegetables deserved love.

It’s always surprising to hear that more than one-quarter of produce is wasted in the United States alone before it even reaches the grocery store because they’re deemed too unattractive for sale.

In Whistler this weekend, chef Derek Dammann told an audience at the food and wine fest Cornucopia he buys kale that a local farmer was just throwing away which raises a good question: why does kale need to look good? 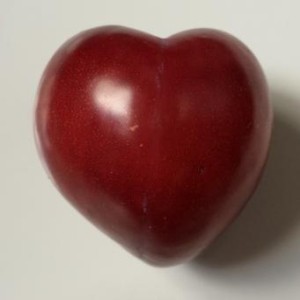 Still many supermarkets around the world insist on selling only nice looking veggies.

The BBC show Hugh’s War on Waste last week saw the broadcaster giving away oversized and curvy parsnips outside a Morissons branch in Wimbledon, to highlight the food waste he says is caused by supermarkets’ excessively exacting cosmetic standards. 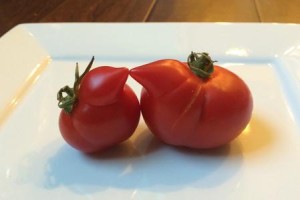 Visiting a Norfolk parsnip farm that supplies the vegetable to Morrisons, the programme highlighted how produce is subjected to stringent aesthetic restrictions. When processing parsnips for inclusion in the supermarket’s two products, smaller pre-packed and larger loose parsnips, those considered too short or ‘too wonky’ were discarded.

Though discarded produce can be sent to be used as animal feed or soup ingredients, the amount of produce at the farm destined for disposal in a single week amounted to around 20 tonnes, enough to fill, the programme found, around 280 shopping trolleys.

As well as causing a huge amount of food waste, the cosmetic restrictions have led to the farm running at a loss and facing closure.

Tristram Stuart, creator of food waste campaign Feedback and previous commentator for Resource magazine, then showed Fearnley-Whittingstall a batch of apples that had been rejected due to standards of redness.

“We’ve proved that the public will buy so-called cosmetically imperfect fruit and vegetables. In 2012, 300,000 tonnes of ugly, cosmetically imperfect fruit and vegetables were sold. There was a really bad harvest, we lost 40 per cent of the potatoes in this country and… just put into our supermarkets those ugly potatoes that previously would have been rejected. No one even noticed. Potato sales stayed the same, no one got more complaints.

During the programme, Fearnley-Whittingstall also considered the waste of the fast food industry. While independent fried chicken shops reported that up to 10 pieces of chicken were thrown away each day when asked, a branch of KFC suggested their figure was closer to two dustbins’ worth.

Using ‘reported’ figures from a previous BBC documentary – The Billion Dollar Chicken Shop – that claimed that each branch throws away around three tonnes of chicken a year, the chef calculated that across the chain’s 850 UK branches, 2,550 tonnes, around 2.5 million chickens, are thrown away annually.

While we at Critter Files don’t necessarily advocate going vegan or going vegetarian, we are very aware that the consumption of meat has an impact on the environment and of course, critters.

Animal agriculture, according to Gene Baur, cofounder of Farm Sanctuary, one of the U.S.’s biggest farm animal rescue organizaitons, has led to the release of more greenhouse gases than the transportation sector.

Sweety joins Tricia, who was rescued in 2008, after both endured cycles of artificial insemination and pregnancy, only to have their calves taken away right after they were born.

Poor Sweety was so nervous when she first arrived at the sanctuary. She couldn’t see anything and she had never been in a real barn, or felt hay beneath her feet. But when she heard Tricia mooing in a nearby stall to comfort her, she immediately began to settle in.

Since then, they have become best friends, with Tricia leading Sweety through her new surroundings, just like tow golden girls. 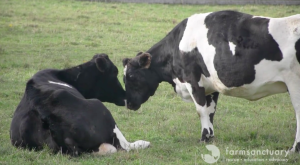