Storytown Village was supposed to be just another family trip for the Simpson family and Gramps but the whole family is enchanted at the petting zoo when lamb after lamb appear, waiting to be adored.

At dinner later, when Marg serves up lamb chops, Lisa envisions those little lambs. Their voices pleading with her. “Li-i-i-sa, I thought you lo-o-o-ved me-e-eee!”

Distressed, Lisa pushes her plate away, unable to eat her lamb chops. But mama Marge tries to ply her instead with rump roast, chicken breast and hot dogs.

That episode of Lisa Simpson becoming a vegetarian aired 20 years ago, on Oct 15, 1995. And that episode, according to Slate.com changed the image of vegetarians on television. If you ask vegetarians or vegans, at least some would say that episode inspired them to go meat-less.

Dad Homer and Bart try to talk her out of her new love of vegetables including gazpacho, forming a congo line with the now-famous line: “You Don’t Win Friends with Salad!” 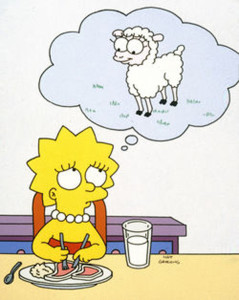 Through the rest of the episode, which continues with Lisa realizing that she can’t dissect an animal in her science class and ruining Homer’s neighbourhood barbecue by stealing away the about-to-be-roasted pig, Lisa’s new-found vegetarianism is thwarted by her family.  She runs away after getting into a fight with Homer.

Finally, she succumbs and eats a hot dog at the Kwik-E-Mart but Apu informs her that what she actually ate was a tofu dog. Apu takes her to a secret garden on the roof to meet Paul and Linda McCartney.

Homer is waiting for her and in one of the best endings on the Simpsons ever, he offers her a “veggieback ride” rather than a piggyback one.