A British pub has been targeted by animal rights activists after posting that it was serving foie gras on the menu to customers.

Activists have protested in front of he Bridge Inn in Derbyshire to draw attention to its menu item.

David and Samantha McHattie, who run The Bridge Inn in Calver,in the Peak District, have been faced with a torrent of abusive and seen their business page plagued with over 190 one star reviews from people in the UK, Canada, United States, Germany and Argentina.

They said they were then blackmailed by a group of users who said they would delete their reviews if the couple took foie gras off the menu.

The McHattie’s have since learned that they are not the only ones who have been targeted.

They found that pubs in Durham and in Nottingham both faced the same threat and were blackmailed into removing foie gras when they had dozens of one star reviews posted.

Although both relented to the request, the reviews were never removed.

They also said that other businesses have been left with no choice but to remove the whole review section from their pages.

On the Facebook page of one of the animal rights group, they posted:

Foie Gras is the fatty diseased liver of a duck or goose that has been force fed grain by a tube shoved down their throats till their stomachs almost burst and their liver grows to 10 times the size that it should be. The birds suffer from a fatal liver disease called “hepatic steatosis”, this diseased liver is then served as a “delicasy”. The birds suffer horrendous cruelty, so horrendous that the process has been deemed extreme and banned in The UK.
Sadly it is still legal to trade it so The Bridge Inn has gone out of their way to source a product that the majority of the country deem to be contraversial (sic) and immoral.

In response to a complaint from a customer, who praised the food but said she wouldn’t be back if foie gras was still being served, the owners said some of the customers are fan of the liver. 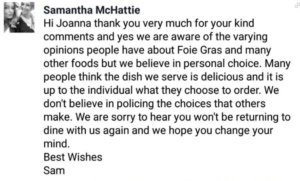 McHattie said in an interview with the Telegraph that one of the animal rights activists compared their decision to serve foie gras as akin to terrorism.

One activist compared me to the terrorist involved in the recent London attack while one said any parent who feeds their child meat is as abusive as a parent who gives their child a cigarette. The majority of these activists are not even from the UK and never even been to the village, let alone the pub.

I am all for democracy and campaigning for what you believe in but there is a certain way to go about it. All they are trying to do is blackmail us and expect us to roll over. We are doing nothing wrong. Foie gras is perfectly legal and we have plenty of customers who enjoy it. We source all our meat carefully and fervently believe practices on foie gras farms have improved greatly in recent years.”