Layla and Sassy are two incredibly lucky sun bears. They were poached as cubs and doomed to spend decades in cages only to be milked for their bile on Asian bear bile farms. That was until Animals Asia stepped in and brought the bears to one of its sanctuaries in Vietnam.

The non-profit group, which aims to end the practise of bear bile farming in China and Vietnam, has now shared some wonderful first images of the two once solitary bears that are lonely no longer.

As the barriers between their two dens opened for the first time, keepers said, Layla rushed through to meet Sassy, who appeared to be surprised another bear was standing in front of her.

“This has been a very emotional integration and it moved me to tears to see Sassy finally play and have the chance for positive social interaction for the first time with another sun bear,” Sarah Dempsey, bear manager with Animals Asia said in a statement. “Life has been lonely for Sassy but I think she finally has the companion she needs in friendly, playful little Layla.”

Experts say more than 10,000  moon, sun and brown bears, are being held on bear bile farms in China. Officials in Vietnam currently peg the number in that country at around 1,245. That’s down 750 from the year before, but bear bile farming was outlawed there 1992.

The animals are kept in small cages and their bile is extracted in painful ways for use in traditional medicine. That’s even though effective medications and other treatments exist.

Layla arrived at the Animals Asia sanctuary in June, 2014. She was a tiny cub that had been snatched from the wild. Sassy is an older, larger female with a long history of stress. Due to trauma as a cub, she had trouble bonding with other bears. But the pair had been living in adjacent dens for the past eight months. Officials hoped they would acclimatize to each other and eventually, bond. 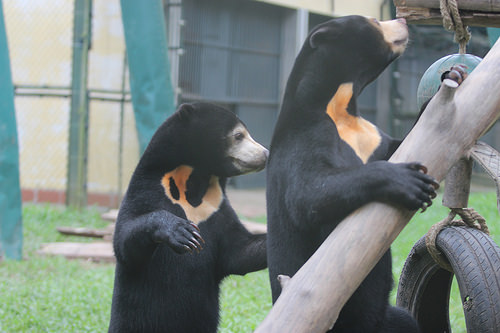 And, quickly they did. They wrestled. They played. Layla jumped on Sassy. They ripped up some plants and wood. They hung out. 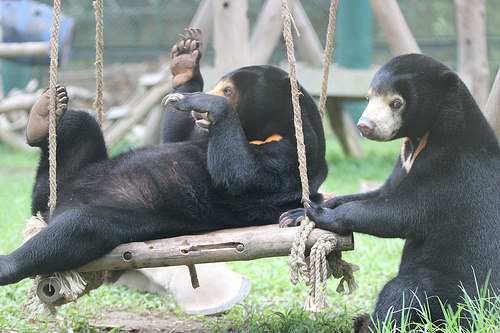 “We are all absolutely delighted for Sassy and Layla. It was by no means a certainty that these two would be able to live together,” Jill Robinson, founder and chief executive officer of Animals Asia, said in a statement. “…The blossoming friendship between these beautiful two young bears is the fruit of that effort and a reminder that we should never give up on a single bear that needs our help.”

It’s encouraging, especially as the organization has just rescued two moon bears in Vietnam and are providing real-time updates about their status.

Both bears had been caged for 15 years and never been outside. They have now been handed into the care of Animals Asia voluntarily by the farmer. Watch for the latest on the bears, now named Yogi and Coco, as they make an incredible 2,000 kilometre “journey to freedom” on Animals Asia’s Twitter feed, Facebook page or Instagram.