Put the names Meghan and Harry together and what do you get? An mash-up of Merry, and that’s the name of a rescued bull PETA India has rescued in honour of the royal couple.

Merry was found weak and injured in India after being forced to toil in the hot sun pulling a heavy cart for his entire life.

After being rescued, Merry was put in a sanctuary in Maharashtra.

When Merry was found, he was suffering from a deep wound on his neck. It has been treated and has completely healed, and he’s found a best friend, another bullock, named Barshya, who was also recently rescued.

The adoption certificate is reportedly flying to Kensington Palace, the place the couple will call home. The bull’s story of how the adoption came to be is included on the certificate.

“Merry was found weak and injured in the Indian state of Maharashtra. He had probably been forced to toil in the hot sun pulling a heavy cart his entire life,” reads the certificate. “He has since been rescued, rehabilitated and retired. His days of hardship are behind him, and he now lives in peace and serenity with his other rescued friends at a sanctuary in Maharashtra. Merry is wearing a garland [comprised from vegetables] around his neck in honour of Prince Harry and Meghan Markle’s nuptials – and he will later eat it!”

Markle has been an animal lover and advocate, once leaving a hotel that was displaying a caged live carrot and another time refusing to wear or promote fur. She’s reportedly told friends who leaked it to the British press that she and Harry were on a strict diet and exercise regime which includes eating a vegan diet on weekdays.

Another source leaked the news that Markle’s stance against hunting prompted Harry to abstain from his family’s traditional Boxing Day hunt last December. 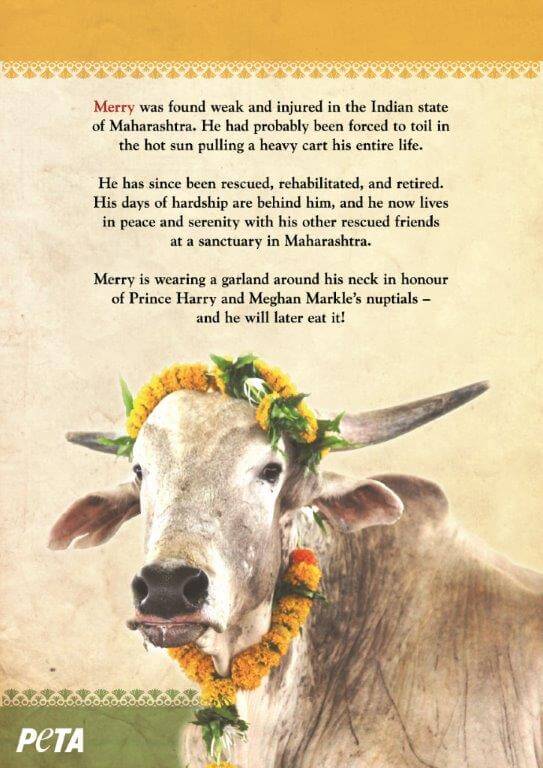