There’s happy news for Bruno, the dog who got stuck in an abandoned well for 27 days.

The seven-year-old Labrador retriever was found at the bottom of a three-metre deep well in the Estevan area on Oct 14.

He had been missing for almost a month after owners John and cindy Billesberger noted he hadn’t come home. The family  searched for weeks on their farm and roadside ditches.

‘He’s got his personality back.’– John Billesberger said to the CBC.

John Billesberger finally located him after noticing his other dogs were lingering at a spot thick with tall grasses. When he pushed aside the grass, he discovered the old well and his dog.

“He was pretty rough looking there,” Billesberger said.

He took the dog to the vet in Estevan — about 200 kilometres southeast of Regina — where they started treatment for severe malnutrition and dehydration, as well as injuries from his trying to get out of the well, which Billesberger estimated was roughly a metre wide. 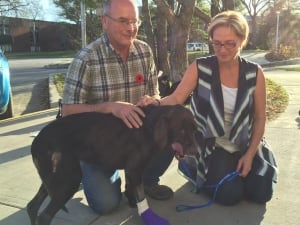 It was estimated the dog lost about 18 kilograms — from his regular weight of just over 40 — during the ordeal. Initially, Bruno was in dire condition and the dog’s survival was in question.

“Every day he got better,” Billesberger said.