There’s a new member of the royal household of the Duke and Duchess of Cambridge.

In a tour this morning in the UK, Kate Middleton, the Duchess of Cambridge, revealed the family has a new pet.

It’s a hamster with the very un-royal name Marvin. 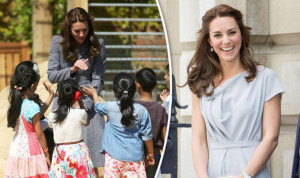 The duchess made a visit to the Magic Garden at Hampton Court Palace in London where she met kids and the playground architect.

The Duchess of Cambridge said she was desperate to “take off her shoes and run around” the palace garden.

Kate was officially opening the new feature at the palace in south west London when she made the revelation that Marvin the hamster had joined their household and Princess Charlotte enjoys getting her face tickled by his whiskers.

No word on the relationship between Marvin and Lupo, the royal household’s cocker spaniel.