Meet Beya, who is known at Happy Tails Camp doggie daycare in Norfolk, Virginia as the Non-Swimming Dog because she likes to just stand there being socially awkward.

All the other dogs around Beya hurl themselves into the pool and jump and splash around chasing each other and the balls.

But through all the mayhem, Beya just stares out.

Some of the latest videos have gotten hundreds of thousands of shares. Beya was even on CBC, but frankly, she doesn’t care.

Other dogs have started to copy Beya. One of her friends, Odin, a German Shorthaired Pointer, sometimes just hangs out with Beya staring off into space. Another dog, a lab, also drifts into oblivion with Ms. Beya at times. 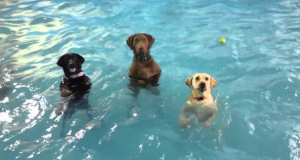