The endangered Puerto Rican Crested Toad is endangered in its native country but after a successful breeding program at the North Carolina Zoo, the amphibian population got a major boost.

The zoo is sending 400 tadpoles back to Puerto Rica after they were bred in captivity in isolation from the eneral zoo populations. 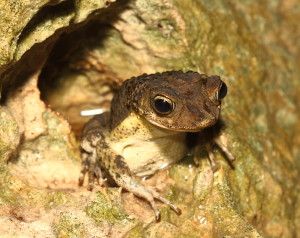 In 1984, the Puerto Rican Crested Toad became the first amphibian to be protected under the Species Survival Plan (SSP) program. At more than 32 years, it is the longest continuous running reintroduction program for an amphibian species. To date, 19 participating institutions have sent over 350,000 tadpoles to Puerto Rico.

Isolating the toads from other species has helped prevent the spread of disease to the wild. Although the toads have bred naturally in captivity, hormones are generally used to time all breedings to coordinate shipments and releases in Puerto Rico.

Tadpoles are sent via commercial airlines to partners in Puerto Rico for reintroduction. Captive toads are individually identified and tracked in a studbook and breeding recommendations are made by the program coordinator six times per year. Typically, three to four institutions breed per release.

Once tadpoles are sent to Puerto Rico, they are acclimated in man-made ponds where they are monitored by the Puerto Rican Department of Natural and Environmental Resources and the U.S. Fish and Wildlife Service until they reach maturity. Currently there are six reintroduction sites that are located in historical habitat and separated from the last remaining wild population in the southern part of the country.

For the past 30 years, wild populations of Puerto Rican Crested Toads in Guanica have fluctuated from 300 to 3,000 individuals. This species is difficult to monitor because it spends much of its time underground. The toads are generally only observed when they congregate during large rain events for breeding.

Habitat loss and introduced species, such as the marine toad, has led to the decline outside of captivity of the Puerto Rican Crested Toad, the only toad native to the country which is easily distinguished by its unique head crest.