Nosey the elephant helps her owner Hugo “Tommy” Liebel make a living by performing as a travelling elephant, letting curious paying customers climb on top of her and taking kids for rides.

PETA has been fighting for years for Nosey, now 32, to be allowed to retiire, citing the circus elephant’s worsening arthritis. 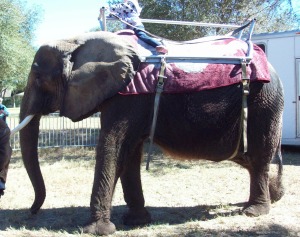 Now with the help of Twitter and celebrity supporters such as Olivia Munn, the pressure is growing on the US Department of Agriculture to step in and free Nosey.

On PETA’s behalf, Munn fired off a letter to the U.S. Secretary of Agriculture Tom Vilsack on Oct. 16 chastising the agency for being aware of Nosey’s condition and not doing anything about it.

Anyone can see that Nosey is suffering from lameness, yet the U.S. Department of Agriculture (USDA) is allowing her exhibitor, Hugo Liebel, to force her to work, even though she’s in pain. As an elephant lover, I’m troubled that the USDA is allowing this abuse to continue and has failed to ensure that this lame elephant is never forced to perform again.”

Munn called on the USDA to revoke Liebel’s licence and allow the pachyderm to retire to a sanctuary.

The USDA has the power to make sure that this condition is not a death sentence for Nosey. If she is placed in a reputable sanctuary, where she would have acres of soft earth on which to roam free, pools to wade in to ease the pain in her joints, and access to expert veterinary care, Nosey could have many happy years ahead.

Nosey’s plight reminds us of Raju the elephant who was kept in chains and captivity for 50 years.

It’s a tactic that appears to be working. Yesterday, PETA announced that tweets helped get Nosey’s appearance in Decatur cancelled.