Raccoons aren’t exactly the most loved – or cuddly – animals on the planet. But when this little guy recently found itself wedged in a fence, a rescue group in Texas jumped to its aid.

Wildlife Rescue & Rehabilitation, Inc. of Kendalia, Texas got a call about the trapped critter and quickly dispatched longtime volunteer Jim Graham to a home in San Antonio.  The non-profit facility, which has been working to return animals to the wild since 1977 or protect them in its sanctuary, posted this update on Facebook Monday.

“With both of his front paws stuck between fence posts he was at the mercy of any passing dog or kid with a bb gun. Jim assessed the raccoon’s condition and, after finding that his legs were still warm and had blood flowing to them, he knew he had to work quickly. Jim carefully used the claw-end of a hammer to pry back the fence and release the visibly shaken, but amazingly calm raccoon. The raccoon, though tentative on both feet, quickly regained his confidence and ran off without even a limp. The scenario could have been a tragic one. If the caller had not contacted WRR and if Jim had not taken immediate action this raccoon would have been in a critical situation.” 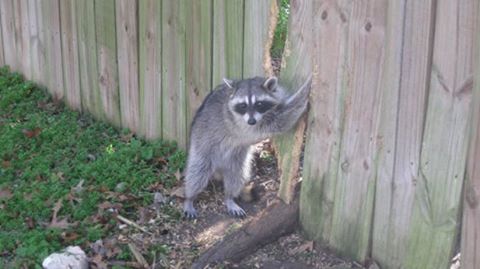