A Canadian oil sands company could face a $500,000 fine if convicted of an environmental crime after dozens of great blue herons were killed in northern Alberta.

The Alberta Energy Regular has been investigating Syncrude Canada Ltd. for the past two years.

It was back on Aug. 7, 2015 when 31 great blue herons were found dead in a sump pond at the company’s Mildred Lake mine north of Fort McMurray.

The AER has charged Syncrude Canada Ltd. for the deaths of 31 great blue herons found in August 2015: https://t.co/TRHsUHZrc9 pic.twitter.com/g3Umf0p3Kz

“The company has been charged with one count under the Environmental Protection and Enhancement Act for failing to store a hazardous substance in a manner that ensures that it does not come into direct contact with, or contaminate, animals,” the AER said in a statement.

Syncrude acknowledged the deaths in its annual sustainability report.

Syncrude said it is now reviewing the charges before it proceeds. 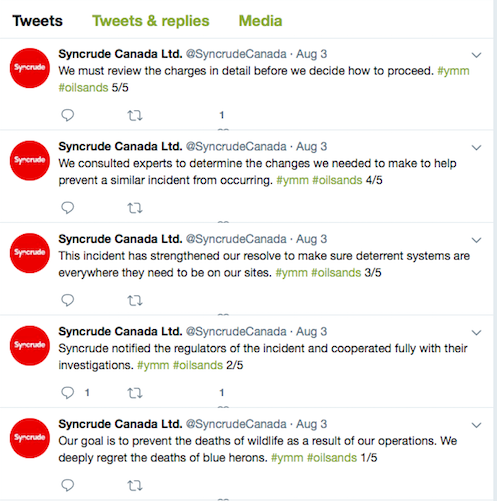 This isn’t the first time its run afoul of environmental protection laws.

The first court appearance is set for Sept. 27 in Fort McMurray.