The Olympics in Rio have been all about the winners and losers and who placed where on the podium.

But Dutch rider Adelinde Cornelissen has upended what it means to be a champion after she withdrew from competition to protect the animal that she called her friend, her horse Parzival. 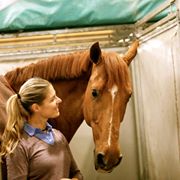 Cornelissen wrote that she withdrew from the competition on Wednesday after her horse unexpectedly fell ill following a poisonous bite from either a spider or insect which produces toxins.

On Tuesday, when Cornelissen went to check on Parzival at the stable, she noticed the right side of his head was swollen and he had been kicking the walls. He also had a fever of over 40 degrees Celcius but he didn’t look sick, Cornelissen recalled.

Parzival was eating and drinking as normal and while walking, Cornelissen said she had a hard time keeping up with her horse. A team veterinarian suggested that to get the toxics out of Parzival’s system, the horse should be given fluids. He was put on fluids from 6:30 am to 3:45 pm to wash the toxics through the horse’s kidneys. 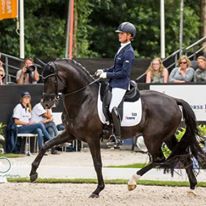 Another check from the vets found that by that time, Parzival’s temperature dropped down to 38.4 degrees Celsius. An x-ray from the horse’s jaw and area showed all was well. 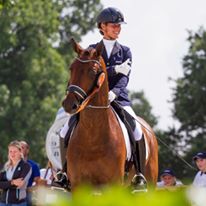 By the end of that day, the fever was down and the swelling in his head had gone down by about one-third.

Cornelissen made a request that she and her horse be given an extra day to recover, swapping places within the team so they could compete on Thursday instead on Wednesday.

At that point I didn’t want to compete anymore… Parzival’s health is more important than anything else in this world! I slept at the stables, checking up on Parzi every hour… I was not going to leave him alone! Of course I didn’t get any sleep…

On Wednesday, Parzival’s temperature dropped again to 37.5 degrees and the swelling had again gone down.

Parzival was recovering after being put on fluids

With the temperature back to normal, Cornelissen said her horse looked fit, was eating and drinking good and although she had decided not to compete, she didn’t want to let the rest of her team down. There was no backup to fill her space. 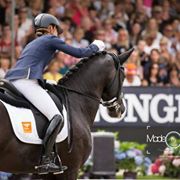 She decided to ride in the arena and walk and trot for 10 minutes. After a few laps, Cornelissen said Parzival looked happy and fit. His fever was down which meant the toxins were out of the system and although there was still some swelling in the jaw, it was lessening.

Cornelissen said she decided to try but felt during the day that while Parzival was ok, he didn’t feel very powerful.

When I entered I already felt he was giving his utmost and being the fighter he is, he never gives up… But in order to protect him, I gave up.

At the competition, Cornelissen made the decision to step away.

My buddy, my friend, the horse that has given everything for me his whole life does not deserve this…. So I saluted and left the arena…..