Surfer Craig Ison has vowed he will never go back to the water after he was mauled by a great white shark while surfing at Evans Head in Australia’s New South Wales.

Ison, 51, has told ABC that his life flashed before him. 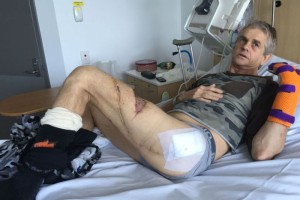 EVANS Head surfer Craig Ison’s life flashed before him 11 days ago when he was attacked by a great white shark while surfing at Main Beach.

In his only TV interview, the 51-year-old recalled the horrific experience on The Project last night.

“It just came straight out of the water and went voom, latched straight onto my leg and just started chewing on it,” he said.

“It was shaking its head…and I’m looking at this thing and I thought far out, I’m cactus here.

“I thought yeah, no bugger it, I’ll give it a go, I’ll hit the bastard in the head as hard as I could.

“It had no reason to attack, other than just to kill, and that’s what he was doing,” Ison said.

“It was very touch and go, he nearly died five or six times, you know,” close mate Tom Augustine said.

“It was so close, he only had a pint of blood left.”

Now Mr Ison realises the magnitude of what his friends did.

“They’re the heros of the day,” he said.

“I punched the shark, yeah, but they saved me.”

Doctors treating Mr Ison said the major structures as far as nerves and blood vessels weren’t particularly injured, he had no broken bones or bites into any joints.

Now he is recovering from surgery, the main threat is infection from the sharks teeth, one of which was removed from his thigh during surgery.

“I feel like I’m lucky but not out of the woods yet,” Ison said.

Following the attack, a shark cull and netting was suggested to alleviate the problem.

“There is at least one shark out there that has got no other intent but to kill,” Mr Ison said.

“I’d hate what happened to me to happen to anybody else, especially a young kid.

“I don’t want all of the sharks to be killed. but there’s just too many of them.

For now, Mr Ison is taking things one day at a time.

“If I get to recover, then the fight’s over and I’ve beaten the shark,” he said.