When Jamie Clarke and Maisie Knight visited the Colchester Zoo last month, they never expected to capture a moment that would draw more than 3 million viewers on the Internet.

Clarke took a two-minute video of Knight, who is heavily pregnant, with her belly pressed against the glass enclosure home of 47-year-old Rajang, an orangutan with an apparent soft spot for pregnant women.

When Knight, who is 37 weeks along, unknowingly rests her belly on the glass, Rajang, who was left an orphan, purses his lips together and leans in for a kiss.

On the two-minute video, Clarke is heard saying “He’s kissing your belly because you’re pregnant,” as Knight giggles. 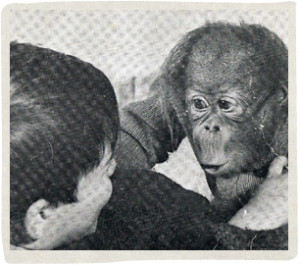 To test the theory that it was the belly that drew the reaction, Clarke puts his hand on the glass and the orangutan doesn’t do anything.

I put my belly too the glass and got a dirty look then when I placed my hand on the he tried to push my hand away my partner returned her belly to the glass and Rajang touched and kissed her belly again through the glass. Truly a special animal that has touched our hearts.

Ranjang, born in 1968, was hand-reared by his keepers at Chester Zoo after his mother died when he was about a month old. His name is a hybrid, meaning he is part Bornean, part Sumantran orangutan.

The zoo says on its website  tbat Rajang has become one of the zoo’s most recognised and favourite resident with regular visitors always popping in to say hello. 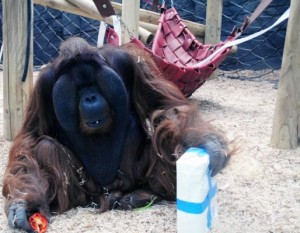 The reason why keepers and visitors adore Rajang so much is because he is very interactive and engages with visitors and keepers in ways which other individuals may not. Rajang has a strange fascination with anything new!

When the zoo staff were first issued shorts, Rajang was fascinated with the keepers’ legs and knees! He also is intrigued by cuts and bruises, and when he sees them on a person, he attempts to investigate them. Orangutans like many primates often use their lips to examine sores etc. Rajang is also fascinated with jewellery, so best keep an eye on your watch!