An otter at the Calgary Zoo has died after being tangled in a pair of pants given to the animal by a zookeeper.

The zoo announced that it had completed its investigation into the cause of the recent otter death in Cequel Lodge in the Canadian Wilds section of the zoo.

It was determined that an unauthorized enrichment item – a pair of pants – had been given to the otters by a zookeeper. The necropsy revealed that the otter drowned after becoming tangled in the pants.

The investigation identified that zoo protocols were broken by two staff members who have been disciplined.

This error is unacceptable. Our animal care protocols are among the most stringent in the industry and must be followed. We will be reinforcing our protocols with every member of our Animal Care staff to prevent an incident like this from ever happening again.

On Facebook, the zoo is getting a barrage of angry comments from people wondering why the employees weren’t fired or how the pants ended up in the enclosure. The zoo says some articles of clothing are acceptable. 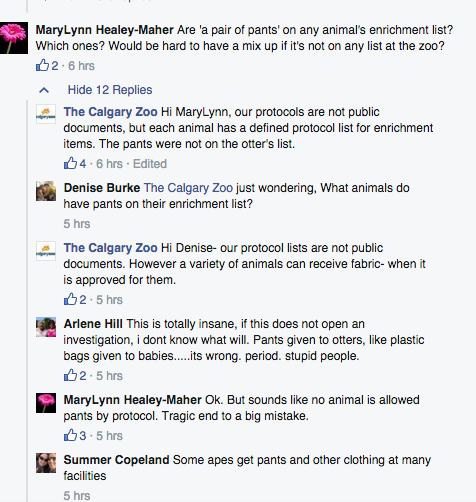