It’s hard to believe this still needs to be said, but people, don’t do this.

Don’t give human food to wildlife.

And now, the British Columbia Conservation Officer Service has charge two people for doing precisely that — with doughnut-holes, no less.

“During the summer of 2017, BCCOS in the Peace region received complaints regarding individuals posting pictures on social media of bears being unlawfully fed,” the service wrote on Oct. 16. “Yesterday charges were laid under the BC Wildlife Act concerning this matter.”

Two people are set to appear in Ft. Nelson, B.C. court on Nov 5.

According to CTV Vancouver Island, court records show Randy Scott and co-accused Megan Hiltz each face one count of feeding or attempting to feed dangerous wildlife.

A Facebook paged belonging to someone named Randy Scott did feature photos of a number of bears and a bin of what appeared to be Tim Hortons mini-doughnuts on June 12 with the caption,  “Thousand timbits ready for bear feeding.”

That post has since been deleted. But this profile photo remains. 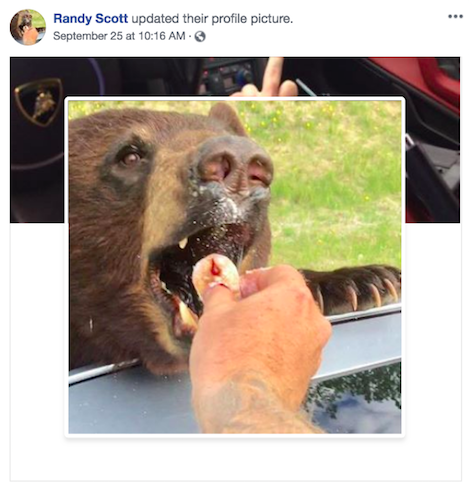 Conservation officer Sam Harris told the Canadian Press the incident came in as a tip, and allegedly occurred along while the pair were driving along the Alaska Highway.

“Our big concern with people feeding bears is that once a bear becomes habituated to people and he starts associating people with food, then they become a danger to the public,” he told CP.

Or, as everyone should already know: A fed bear, is a dead bear.

During the summer of 2017, the Peace BCCOS received complaints regarding individuals posting pictures on social media of bears being unlawfully fed. Today charges were laid concerning the matter and as a result two individuals are scheduled to appear in Ft Nelson Court on Nov 5. pic.twitter.com/MzZ0L0senX