If this doesn’t get you in the Christmas spirit, nothing will.

“Isn’t this one of the cutest things you have ever seen!?” notes Amazing Japan’s Facebook site. “When visiting the Vogel park in Matsue one does not only discover various exotic birds but can also feed and take pictures with them. We were especially excited about the penguin show!” 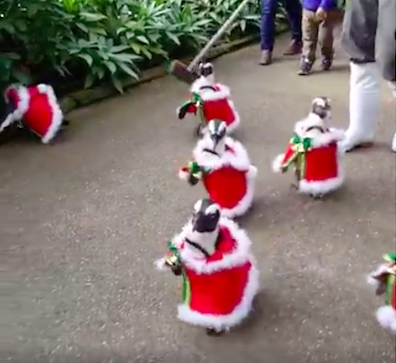 Some people have complained online that the penguin parade is cruel.

Like Anne Duncan, who posted on Amazing Japan’s Facebook page: “No, no, no – this is so wrong – maybe walk with them but please don’t have them dressed up – they don’t need it to look adorable – they are that already.”

But others, have defended the festive spirit of Matsue Vogel Park.

“Oh my god. The people commenting on this video are morons. It’s a tiny little cape. They are adorable little penguins. They aren’t going to over heat or anything because this type of penguin doesn’t live in the cold. Crazy I know. So just let the penguins strut their shit in their little capes and know deep in your hearts that the world will keep turning once you move on to the next video.”

Wherever you fall in this debate, watch and you’ll see what this particular video has now been viewed about 25 million times.