It sounds a bit like a Monty Python comedy sketch.

But for a little while at least, a pigeon found in the province of Gujarat in India sparked some major security concerns.

It all began when an alert security guard spotted a pigeon who refused to be shooed away.

The pigeon’s refusal to flee when shooed caused the bewildered guard to take hold of the bird and that’s when he spotted a chip tied to one of its claws and a ring with the number ‘28733’ on the other claw. Here’s the suspect bird on the left. 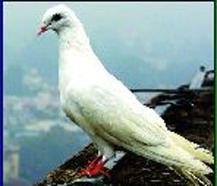 The bird also had writings supposed in Urdu/Arabic across its wings.

The intruder bird was rushed by the security guard to his superior which then handed the  possible “winged suspect” to the Coast Guard.

Because officers couldn’t interrogate the tagged and marked intruder, the police were then contacted. In a hilarious recounting of what happened then, the Times of India said the bird was stripped search and forensics were called in.

The ring and chip were taken to the Forensic Science Laboratory, Gandhinagar for a closer examination.

“The chip was found to have the writings ‘Benjing Dual’ inscribed on it. This was Googled by the agencies who found that ‘Benzing Dual’ is a sensor chip used for racing pigeons. Further, the Urdu/Arabic writings in blue on the pigeon’s wings was interpreted as “Rasul-ul-Allah’ (messenger of Allah).

The Devbhumi Dwarka SP also informed the home ministry that the opinion of the forest officials was sought about the possible intentions of the pigeon. Their feedback was that such pigeons are mostly found in northern India and used for racing in foreign countries. The forest officials opined that the pigeon in question may have slipped out of captivity while on a ship in the deep sea and flown to the shores in search of drinking water.