A poppy-stealing pigeon at the Australian War Memorial has set up a nest using flowers snagged from the Tomb of the Unknown Soldier.

Each day, the pigeon has been swiping poppies from the Tomb and relocating it to an alcove above the stained glass window of a memorial for a wounded Australian soldier. 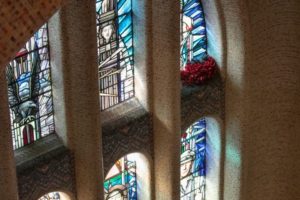 The wounded soldier symbolizes endurance and the nest of poppies has become itself symbolic of the bond between soldiers and birds in the war arena, according to an article from the Australian War Memorial site.

During the First World War, when wireless was still in its infancy and prone to stop working, pigeons were relied on for communication. When the Second World War broke out, soldiers turned to pigeons for help once more.

“One of the surprising things about pigeons is how widely they were used in the Second World War,” Dr Hampton said.

“We often think about the Second World War as a time when technology has taken over. We’ve got our trucks instead of horses, and wireless radio, and sophisticated radar signals, and all those sorts of things. But particularly in the Pacific, the mountains and the humidity meant that the wireless radios didn’t work very well, so pigeons were actually the most effective way of getting messages up and over the Owen Stanleys, and throughout the islands.”

Read more at the Australian War Memorial’s site and find out about how some pigeons even saved soldiers’ lives.