It’s been 13 years since the last red ruffed lemur was born at San Diego Zoo.

The zoo has a successful history of breeding the lemurs, which gets its name from the rust-coloured patches on parts of its body. Its head, stomach, tail, feet, and the insides of its legs are black but its ruff, which is its collar, is reddish. 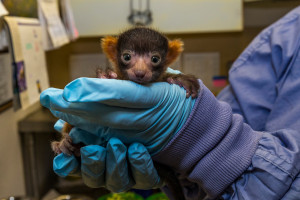 Red ruffed lemurs are one of the world’’s 25 most endangered primates, published by the International Union for Conservation of Nature SSC Primate Specialist Group.

Only found in the wild in Madagascar

Outside of captivity, the red ruffed lemur is found in only one region in the entire world: the Masoala Peninsula in Madagascar.

The San Diego Zoo has a successful history of breeding red ruffed lemurs; in fact, we’ve had over 100 born since 1965.

On May 18, 2016, one of those red ruffed lemurs, a gal name Morticia, gave birth to her first offspring.

Morticia is a first-time mom, but she has proven to be a great mother.

For the first week after the birth, it was important for keepers to get daily weights on the infant, to make sure he was gaining weight. A rising weight indicates that the baby is successfully nursing and that mom is taking good care of him. Morticia is willing to let keepers borrow her infant in exchange for some of her favorite fruits, but she is eager to get him back.

He has been gaining about one-third of an ounce (10 grams) a day and is getting more active and aware of his surroundings. Although he currently weighs only 6.6 ounces (188 grams), red ruffed lemur babies grow up fast. During his first month, we expect him to be exploring outside of his nest, with Morticia watching closely.

No name yet for the little lemur.