A Canadian police service dog was hurt while hunting down a 17-year-old boy, who is now facing 68 criminal charges, mostly related to auto thefts.

RCMP in Wetaskiwin, Alberta were responding last week to the theft of a Cadillac SUV, followed by a gas-and-dash by the same vehicle, when they came upon a knocked-down fence. That’s when Mounties spotted a suspect running away from the stolen SUV, sending Fantom, a key member of its canine unit into action.

“The Wetaskiwin Police Service Dog Unit was able to track and apprehended the suspect,” Constable Holly Porterfield said in a statement this week. “During the chase, Fantom, the 2.5-year-old police service dog did sustain minor injuries after colliding with a vehicle during the chase. He is expected to make a full recovery.”

The teen, who cannot be named under the Youth Criminal Justice Act, was already facing 25 charges in connection with the theft of a truck in nearby Millet last month, but was released by a judge.

When Fantom tracked him down, the teen was facing another 37 warrants related auto thefts and breaches of court orders. And now, he’s facing new charges including dangerous operation of a motor vehicle and driving without a license.

He will remain in custody until his next court appearance, RCMP said.

Police dogs do everything from locating missing people and sniffing out drugs or bombs to tracking down criminals. Usually, they retire around age 7. Fantom got his unique handle as part of a name the puppy contest two years ago. 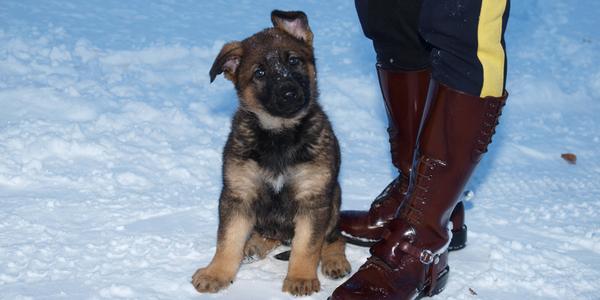