The plight of 27 puppies and dogs who almost became victims of an arson attempt at the Prince and Princess Pet Shop in Las Vegas has gripped the city and the nation.

The New York Times even stepped in to do a big national story about the bizarre story, much of which was captured on video.

As the dogs were in their cages, video saw two people douse the place with gasoline and set the place on fire. Two people, business owner Gloria Eun Hye Lee and her co-accused Kirk Bills have pleaded not guilty to charges of arson.

Thousands of people have flooded the Animal Foundation in Las Vegas, a no-kill shelter wanting to adopt the dogs, mostly small breeds. They included Yorkshire Terriers, French bulldogs and pugs 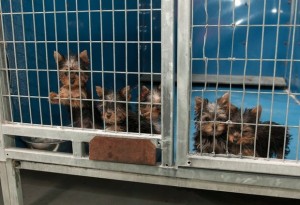 The requests overwhelmed the foundation so they decided to launch a special online raffle earlier this month for anyone who wanted one of the dogs. For the price of $250 per ticket, the cost of the adoption, winners of the raffle could get a dog.

Christine Robinson, the executive director of the foundation says it was the only fair way to ensure that everyone who wanted one of the dogs had a chance to get one.

We want to allow everyone interested in adopting one of these dogs the opportunity to adopt. A raffle process is the best way to guarantee everyone receives a chance.”

Raffle participants will be required to complete an adoption application when purchasing their tickets, and must also pass an in-person adoption screening before an adoption will be finalized.

However,  there was a crimp in the foundation’s plans. A lawsuit was launched by some individuals saying that a raffle was not the best way to get the dogs adopted.

Another wrinkle in the adoption process was the appearance of Ms. Lee’s former husband and partner who claimed he owned the puppies through his company.

Those cases are now being moved through the justice system.