Rocket cats seemed like a good idea at the time.

A warfare manual that dates back to the 1530s includes extraordinary illustrations of jet-propelled packs strapped to the backs of cats and doves. The document was digitized by the University of Pennsylvania, but it was only recently translated by one of the school’s historians, Mitch Fraas, after receiving an email that linked him to the odd drawings of the would-be ill-fated critters of a bygone era 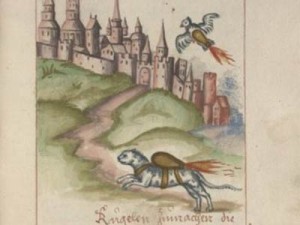 The document, written by Franz Helm of Cologne, who was thought to have battled against the Turks in south-central Europe, as the use of gun powder was coming into fashion.

The manual includes weaponized cats and birds with explosives, some loaded with spikes, strapped to their backs.  The accompanying instructions translated from German by Fraas, suggests that commanders could use them as weapons to “set fire to a castle or city which you can’t get at otherwise.”

“Create a small sack like a fire-arrow . if you would like to get at a town or castle, seek to obtain a cat from that place. And bind the sack to the back of the cat, ignite it, let it glow well and thereafter let the cat go, so it runs to the nearest castle or town, and out of fear it thinks to hide itself where it ends up in barn hay or straw it will be ignited.” 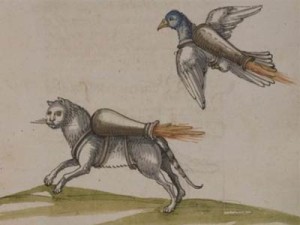 There’s no evidence that animals were used in such fashion, according to Fraas. Of course, humans have long used animals in warfare. The Trojan Horse. Actual horses. Dogs.  Elephants. And now, Fraas has been flooded on Twitter with other ancient evidence of our attempt to turn animals into weapons, such as this 11th centre Chinese fire ox.

Of course, the discovery of rocket cats also gives us the perfect opportunity to reflect on a modern-day comical invocation of animal warfare. Behold, Andy Samberg’s laser cats.