The Natural History Museum Rotterdam has added an asset to its exhibition Dead Animals with a Story: a stone marten that had accidentally found its way into the CERN particle accelerator perhaps following in the path of another marten who famously shut down the accelerator last April.

The 27-km-long accelerator went dark after the electrocuted predator – the CERN weasel – crawled in somehow.

The preserved electrocuted weasel is now part of the exhibition alongside illustrious predecessors such as Dominomus, the McFlurry urchin, and the incident which started the whole exhibit: the necrophiliac/homosexual mallard.

Dead Animal with a Story exhibit showcases what happens when humans and critters collide and the dramatic consequences.

The CERN weasel is the second dead-animal-with-a-story from beyond Amsterdam’s borders. The first was the Frühstücksvleermuis – a pipistrelle, or hamster, which caused a stir in Germany in 2012 by coming to an end in a cup of McFlurry.

The accelerator on the French-Swiss border near Geneva is a a ring-shaped tunnel with a circumference of 27 kilometers, and is known as the Large Hadron Collider (LHC). The European research institute CERN conducts physics research into elementary particles at the accelerator bringing the particles into collision nearly the speed of light with each other.

The largest machine in the world sometimes comes into conflict with more mundane forces of nature: the local wildlife. Most famously, in April 2016 a stone marten ( Martes foina ) caused a short circuit in an above-ground power station causing the particle accelerator to shut down for a week.

The Natural History Museum Rotterdam asked for the body of the weasel right after it happened but the CERN fire department had already destroyed the critter corpse.

Then on November 20, 2016 at 22:42 pm a second stone marten on the fence of a CERN distribution station climbed in and was electrocuted, shutting down the particle accelerator again. The weasel–also called a marten in Europe– did not survived the surge of 18,000 volts.
After a day in shutdown, the particle accelerator was restarted. This time the museum knew to grab the dead CERN marten right away.
The CERN weasel is a young female with an empty stomach. The flame and heat of the electrical jolt scorched the weasel’s fur, burned the whiskers, deformed nails and feet charred.
Rotterdam and CERN particle physicist Tristan du Pree helped the museum to preserve this animal for the exhibition. In an interview with CBC As It Happens,, the museum’s curator Kees Moeliker explained how they got the critter corpse.

Helen Mann: Mr. Moeliker, how did you acquire the infamous CERN weasel for your museum’s exhibition?

Kees Moeliker: We have a large network of people who know what we collect here for the Dead Animal Tales exhibit. In April, last year, the first CERN weasel collided with the CERN machine we immediately told them we were interested in acquiring the specimen because it’s a fine example of how man and animal collide with technology. Unfortunately, the animal was disposed of so we were kind of disappointed. But, last November, when there was another occasion, the people over there were aware of our interest. We drove down there and collected it. 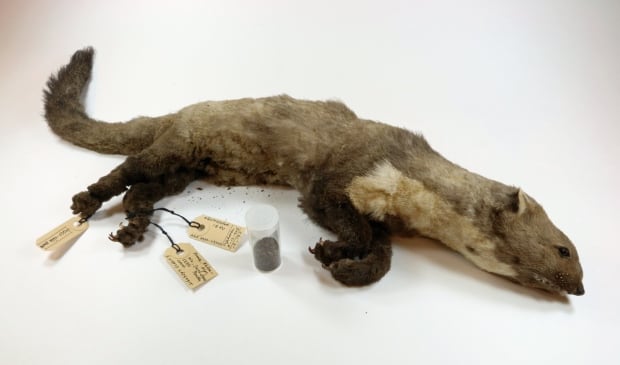 HM: How did this animal die?

HM: I would imagine it would be pretty quick, given the voltage. 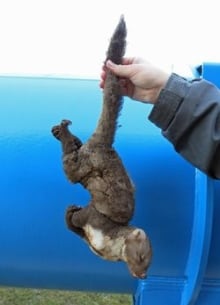 HM: What inspired this Dead Animal Tales exhibit in the first place?

HM: Was there a particular incident that kicked off this whole thing?

KM: A long time ago when I started working here as a curator. On a beautiful evening in June 1995 a mallard duck crashed into the glass window of my office and got killed. It landed on its belly. But next to this dead duck, when I looked out the window, I saw a live duck. This live duck started to mount the dead duck. So this was another collision and of course the consequences were kind of traumatic. This was the first case of homosexual necrophilia in this particular duck species. It made me think about the impact of the human environment on the behaviour of animals, which of course was not really natural [with] what happened there.