Tara Anderson became a foster mother to Derby, a dog with deformed front legs with no paws. First she tried a cart, but found it still limited his mobility. He couldn’t really play with other dogs. And, it didn’t mimic real running.

Anderson also happens to work at 3D Systems, an innovative printing company based in Rock Hill, S.C.. Her company came up with an incredible solution. Custom-created prosthetic devices have allowed Derby to run for the first time. 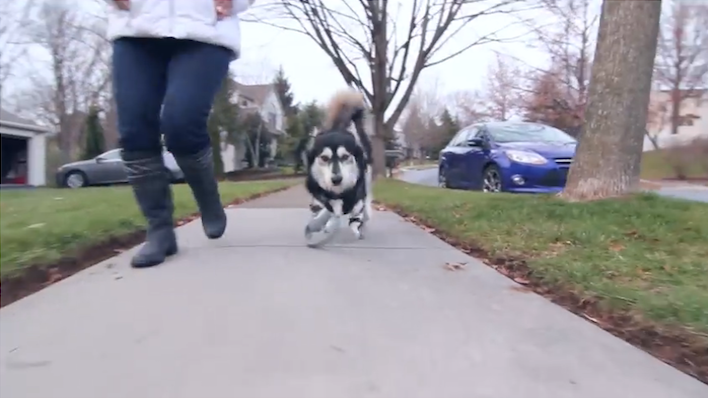 “He runs with Sherry and I every day, at least two to three miles,” says Dom Portanova in a video posted on YouTube. “When I saw him sprinting like that on his new legs it was just amazing.”

The company worked with computer designers and an animal orthotics specialist to customize the devices specifically for Derby. Then, a super fancy 3D printer created the new, comfortable limbs in just a few hours.

“The beauty of 3D printing is that if the design needs to be adjusted, we don’t have to wait for time-consuming and expensive traditional manufacturing processes, we can simply print out a new set,” Buddy Byrum, a vice-president with 3DS, said in a statement.

The video of Derby testing the new legs, was only uploaded on Dec. 16, but already has more than 5 million views. Some people have wondered why the prosthetics weren’t built so Derby could stand a little taller. The company responded.

“Many of you have pointed out that Derby’s prosthetics seem too low,” 3D Systems explained. “We started this way to give him a chance to get used to his new legs. But with 3D printing it’s easy to iterate design, so he is being fitted with progressively longer legs until he reaches his optimal height. Work is ongoing and we are about to 3D print the 4th version of his prosthetics.”