Sometimes fish need a leg, or rather, fin up.

That’s where Seattle-based Whooshh Innovations comes in to deliver a “fish transport system” to help fish swim against the stream — and over things that are getting in their way. Think of it as a roller coaster turned “salmon cannon” for the scaly set.

“It moves fish through a flexible, pressurized tube, safely transporting them from one area to another,” World of Engineering trumpeted over Twitter. “This solves a major problem for migratory fish like salmon.”

This is the Whooshh Fish Transport System. It moves fish through a flexible, pressurized tube, safely transporting them from one area to another. This solves a major problem for migratory fish like salmon. #worldofengineering #engineering #nature #fish
Credit to @JustWhooshh pic.twitter.com/9Xde0kSBjl

Whooshh has patented some cool tech to do the trick.

“Whooshh transports fish over dams, around hatcheries, and sorts for invasive species,” the company explains.

And all if it started eight years ago after the company’s CEO watched some salmon being moved in buckets by helicopter over a dam. 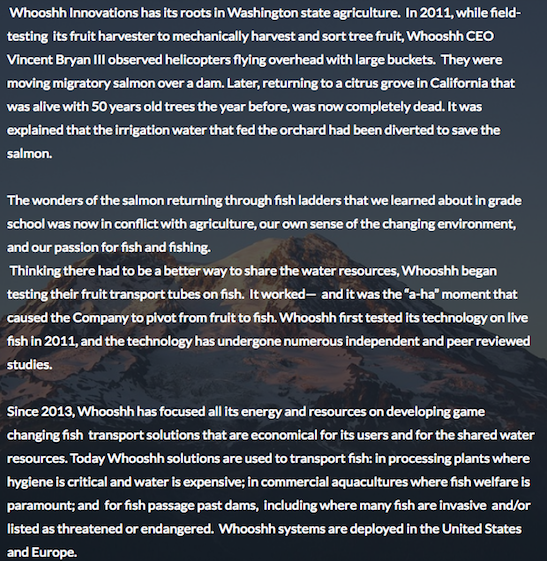 The company says it’s a better way to help fish get around than fish ladders.

It is pretty incredible and has far-reaching implications.

Fish are a much-needed food source for people and animals in the water and on land.

It’s also a way to help deal with climate change.

“Whooshh Innovations enables native fish populations to recover while simultaneously making up to 10% more water available for hydropower or agriculture,” the company explains. “If climate change is to be tackled head on, we need hydropower to reduce CO2 emissions and we also need fish and agriculture to help feed the planet.”

And cope with natural disasters that may impact spawning fish.

A Seattle-based company is waiting to find out if its “fish transportation system” will be called into action to help move tens of thousands of spawning salmon trapped by a rockslide in the Fraser River north of Lillooet. @ctv_mariaw reports. https://t.co/4I3HSTMqzP

#BigBarLandslide Update: Here’s a close-up of the magnitude of the landslide, the rapid waters and scale of the rock face. Crews are continuing to work on multiple methods to create a safe passage for the #salmon. https://t.co/zrxnFsNKmb pic.twitter.com/hv9TUeMfwy

People far and wide are wowed by the contraption.

This system helps native fish pass over dams in seconds rather than day pic.twitter.com/aAmhHArjPg

Innovation that’s good for the planet.