In Midlands Australia, Shaun the sheep has been gathering wool.

All for a chance to break a world record to be the world’s wooliest.

So for six years, Shaun has been unshorn, with the hopes that he would break a record set by Shrek, a New Zealand sheep who died in 2011. 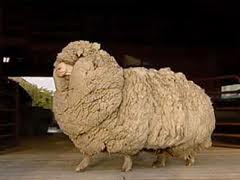 Now Shrek the sheep was a sight to behold.  That’s him on the right.

The merino wether–which is a castrated male sheep–(now you know!) was put to sleep at the age of 17.

He evaded the annual shearing for seven years by hiding in caves, munching on small native shrubs. Easy to hide among the 17,000 sheep that also lived on the 27,000-acre farm

Apparently, according to the Daily Mail, Shrek had a glamorous life making the rounds of TV shows, national tours and even into the pages of Playboy magazine, which sadly we could not confirm.

He was shorn on national TV and was featured in three books.

In Australia, Shaun the Sheep (on the left) looks like he won’t get the same sort of fame.

Shaun fell ten pounds short of the record. Shrek had 62 pounds of wool on him when he was shorn.

Shaun had just over 50 pounds of wool taken off.