You shear a sheep to make a sweater but it’s not every day you see a sheep wearing an ugly Christmas sweater.

But that’s what the Nebraska Humane Society encountered last weekend when they were called in to do a rescue.

Here’s something we don’t see every day! Over the weekend this sheep was found wandering the streets of Omaha spreading Christmas Cheer in his holiday sweater! Animal Control was called and brought him in. If you’re missing a sheep that enjoys wearing Christmas Sweaters he’s here at NHS. He’s not currently available for adoption, but we’ll let people know when he’ll be available.

So this sheep in a Christmas sweater (was it wool?) appears out of nowhere and is lost and alone on the Omaha streets.

You may be wondering if there was a shepherd around counting sheep and getting distracted. Others had a more cynical take and believed it was a drunken Christmas party prank.

We imagined the likely story as a scene from Home Alone.

A frazzled family is rushing around for the holidays when all of a sudden, the mom bolts upright in her airline seat and screams out: Kevin!

The sheep it turns out is name Gage and he’s the beloved baby goat belonging to Margaret. She thinks someone must have let him out of the family backyard.

Margaret was the one who bought him the Christmas sweater. Gage thinks he knows the sweater but it was a very brief encounter and they didn’t exchange numbers the next morning.

I’m glad he wasn’t eaten. People eat these things this time of year. 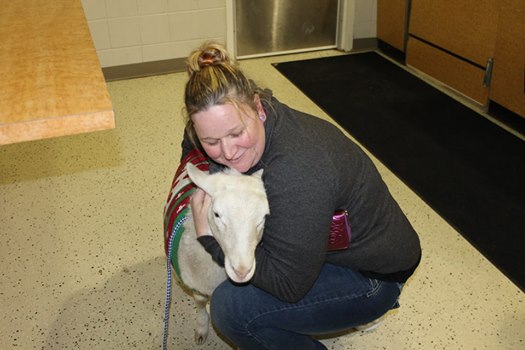