In a south western Russian village a few months ago, a little lamb was born.

And this lamb freaked people out and opened up speculation of who it’s father may be.

The lamb was born with human features–not just any humans, but it resembles a grumpy grandpa. See for yourself. 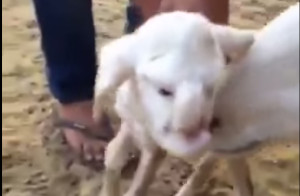 Owner Blasius Lavrentiev, from the village of Chirka close to the Republic of Dagestan in Russia’s south west corner, had been eagerly anticipating the birth of his prized ewe.

But he was shocked at what came out. The human face sheep was so alarming that Lavrentieve, 45, was worried that he wouldn’t be able to sell the critter for much.

But he told the Irish Mirror that he’s now been offered 10 times the normal price for the little lamb. The buyer is a circus.

That’s prompted Lavrentiev to reconsider and he now sees the lamb as a sign of good fortune. He’s turned down the offer.

A veterinarian in Chirka believes the lamb has the unusual features because an excess of Vitamin A in the mother caused the facial deformities.