Suspected poachers ambushed and killed five park rangers, their driver, and wounded a sixth worker in the worst-ever attack in Virunga national park in the violent country of Democratic Republic of Congo.

The attack took place in the central section of the park, according to a tweet from Virunga National Park, the vast reserve which is the home of the rare mountain gorillas.

Only 880 of these gorillas are still alive and one quarter of them live in Virunga, the oldest park in Africa.

“We are profoundly saddened by the loss of our colleagues yesterday. Virunga has lost some extraordinarily brave rangers who were deeply committed to working in service of their communities. It is unacceptable that Virunga’s rangers continue to pay the highest price in defense of our common heritage and we are devastated that their lives have been cut short in this way.

We send our deepest condolences to the families, wives and children they leave behind and remain committed to creating a better future for eastern Congo.”

The attack by MaiMai militia was the deadliest attack to Virunga staff in recent years and brings the total number of rangers killed to 175 to date. 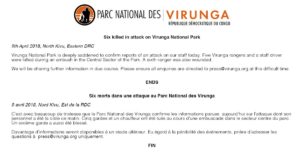 Those killed were identified as:

The rising toll has earned the park a reputation as one of the most dangerous conservation projects in the world.

Last August, five rangers were killed when local militia attacked their post in the northern part of the park on the shores of Lake Edward.

To raise money for them, rangers and their supporters have been running in the London Marathon. One of the first female ranger Ranger Angele, pictured above, is currently in London to take part in the 2018 run.